People sometimes say that you play your best golf when you’re not thinking.

This is only partially correct because there is a huge difference between thinking and worrying.

Worrying is Not Thinking

Worrying is when you’re looking at all the negative things that could go wrong, and this actually begins the process of making them a reality!

Old Murphy had some laws and one of his laws said that anything which can go wrong, will go wrong.

That’s part two though and I’ve skipped ahead. Part one is actually the initial act of THINKING in terms of planning, strategizing and then selecting and committing to an appropriate shot.

Every Shot Must Have a Purpose

In an early video on the channel, I shot a 71 on a pretty tough track, Dynasty Golf Course. It was the day after I read the book by Pia Nillson, “Every Shot Must Have a Purpose”.

The concept of every shot needing to be well planned, thought out, then committed to, was well explained. But the concept that changed it all was that once you finish planning, deciding and selecting, you have to commit ONLY to the positive outcome of the shot.

I include the STOP AND THINK FOR 10 SECONDS mantra throughout this guide because so many golfers just do not THINK at all on the golf course.

I mean completely 0% thought going into most shots. It's usually double digit handicappers. Now, I'm not being rude and horrible to the dub digits, but there are so many shots being left on the course because of total brain shutdown.

I only pick on the 9+ handicappers because their average scores are above 85 and I know for a fact, everyone shooting 85 or more is losing 5 to 10 shots per round just because they do not stop and think about what they are about to do.

I know this because I’ve spent my entire golf life playing mainly with double digit handicappers. I have to sometimes shake a few up on the golf course to switch on their brains. And it works. We always win.

Begin switching on your brain below:

When you’re facing a shot, why are you laying up to a distance you don’t like to hit, for example a 45 yard pitch over a bunker? You're setting yourself up for a disaster.

Why are you hitting a driver on a 345 yard hole with water all down the right side despite the fact you hit a fade? Are you going to drive the green? What's the upside vs downside of that hero stupid shot? You leave yourself a partial shot at best, and at worst you take a drop. Do you think you can drop where the ball is lying in the water? Oh no my friend, you have to drop the ball WAY back near the tee where it crossed the hazard.

Why are you 15 yards short on every approach? Do you know your club carry-distances? If you do, why are you short of the green? You hit a fade all day, but you're aiming for a draw on every hole, hitting your next shot from the right hand side, deep in the poefies.

Why are you hitting a 3 wood from 245 when your 3 wood goes MAXIMUM 220? You know you’re going to top it or slice it from hitting the ball too hard. Then you’re 180 yards away but this time in the bushes.

If there’s water in the front of the green, why are you pin hunting, with 30 yards of green behind the cup?

Why are you looking up early on your putts, to see if you missed the putt in some self fulfilling prophecy? The hole is 8 feet away and it’s not going anywhere. You’re lined up good, your pace is good, just keep your head down forever and WAIT FOR THE RATTLE of the ball in the hole.

Please just stop! And think, for 10 seconds before hitting the shot that is about to destroy your enjoyment and send you into a negative spiral that affects not only this hole, but your entire day and your partners day too.

Select the best shot in every moment. This takes only a few seconds of thinking.

This is how I plan each shot: 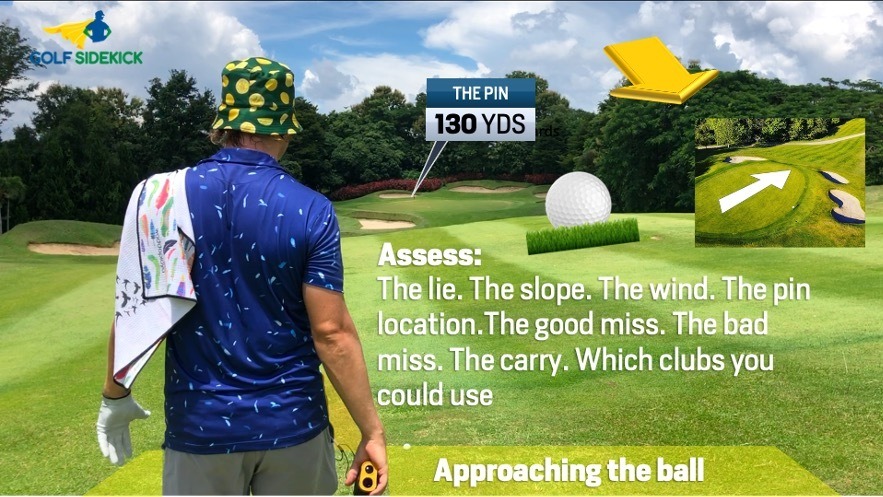 No this does not delay play

This takes 10, maybe 20 seconds or less and starts on the walk up to the ball. You do not delay play by doing this. You delay play by hitting shots that you did not think about.

You have to go search for balls, try to retrieve it from the water, take a drop, walk back to where you have to drop the ball, adding endless shots and time to your round. Add in frustration and reactions of disbelief and you're going to be slow if you don't THINK.

Warning: Only a Golf Karen will say “oh if I add 20 seconds to every shot, and I hit 80 shots, that’s 1600 seconds which is another 1000 hours added to my 6 hour round” - yes seriously I have had comments like this on the videos. Learn to create a plan as you walk to the ball, 10 yards away. I don't like Golf Karens.

Use your time while others are playing to formulate the plan in your head. If you’re holding up play, it’s because you’re starting this process only when it’s your turn to play. Plan while other people are playing their mindless shots.

The hard part is committing to these decisions... without even a hint of doubt entering your mind. I mean ZERO doubt. Your commitment must be 110%

Before you hit, you need to go through the preshot routine. You make all your calculations and decisions standing in the THINK box away from the ball. You get your plan laid out then commit to your plan.

You move across an imaginary DECISION LINE separating the THINK box from the PLAY box. The PLAY BOX is the box where you hit your shot. There is NO thinking in this box. Once you’re in the PLAY box, you think of only execution of the shot. 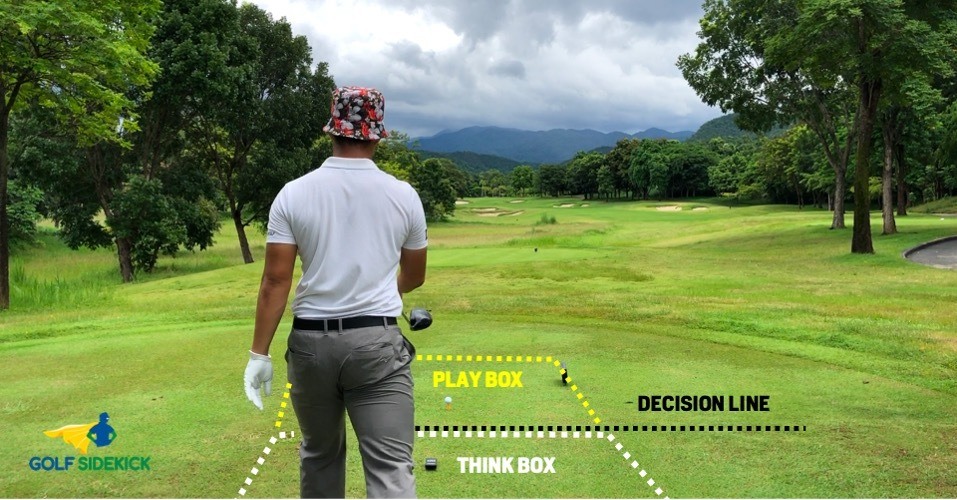 This is when you switch off the brain and only focus on success. No worry, no doubt, no thoughts. If you have even 1% doubt, back away. Start again. Commit. Execute.

You’ve done the assessment of the lie, the wind, the conditions, your feeling, your confidence, your shot in the arsenal. Your hard work is done. It’s time to switch off and forget the what-ifs, the what-abouts.

HIT THE BALL THINKING OF WHAT YOU WILL DO, NOT WHAT YOU MIGHT DO WRONG!

Once you stand at address over the ball, the only thoughts allowed in your mind are about successful execution of the shot. These think and play boxes might be a new concept to you but it will blow your mind when you implement it fully. I highly recommend the book EVERY SHOT MUST HAVE A PURPOSE by PIA NILSSON.

If you don’t have a pre shot routine, you should

We’ve all thought we were committed to a shot, or we all think we have a bulletproof pre shot routine. But in your next round, when you stand over the ball, ready to hit, are you really ready?

Be mindful and conscious of yourself.

Are you rushing? Is your pre shot routine just a random swing, with no purpose? Are you just swashbuckling like Jack Sparrow after a bottle of rum trying to get it on with Keira Knightly?

STOP. THINK FOR 10 SECONDS. Get into the game playa.

In the example I ran through above, if I even remotely start thinking that the 8 iron is the wrong shot, I must stop.

If the possibility of landing in the water, or the thought of “don’t go in the water” enters my mind, I must reset until it’s gone. If I imagine the 9 iron will work better, I have to switch to the 9 iron and go through the entire process again.

If you do not commit 110% to every shot, you will not play to your potential.

This is so key. 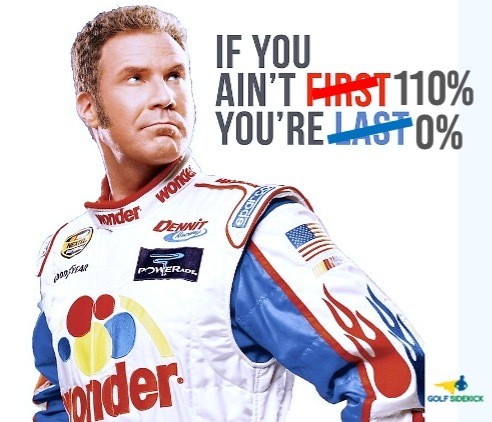 110% commitment to every shot puts you in control. You can judge your shots in a totally different way. Instead of being mad at your lack of technical prowess or some other nonsense you create in your mind, you can understand your shot was shit because you didn’t commit.

If you commit fully to the shot, the only thing that can go wrong is a bad plan. If you commit to a good plan, you start to see big changes in your golf. Your plans will improve as you gain more experience on the course. As you bring more feedback into your game from how YOUR game reacts to different situations, you will adjust your plans.

If you’re picking the most stress-free and easy shot FOR YOU, IN THE MOMENT, you should be 110% committed to the shot. It’s very low effort to fully commit to a shot when you pick the correct shot for your good plan.

If you are not committed, it means you picked the wrong shot.

Do you see how different that is to the popular perspective of “playing golf swing” instead of “playing golf”? You are NOT crap at golf. You just haven’t harnessed what you are capable of by putting your mind into it.

Some of the words are harsh but most people need a slap and a wake up call. You do not need to take it so seriously like a pro stalking a birdie putt in the Masters.

But you can afford and have the time to just spend a few seconds creating a plan. Thinking of the next shot and where you might want to play from. You can do it.

Mindless golf is not fun golf. Being in control is the ultimate fun for any man.

Think back on your last rounds. The worst shots are all the ones you weren't committed to. Why were you not? Because you were hitting shots you don't know and that is all part of knowing yourself in golf and playing cocky conservative golf. 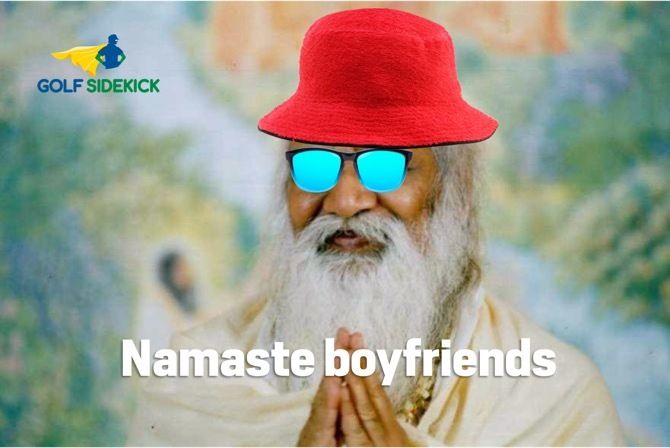