Is there a more divisive club in golf?

People who use them love them. People who don't...well they hate the guys who do!

The reason is simple. These things work for most golfers especially the guys who have a tough time chipping with wedges which is what is expected of us.

But since the main philosophy of this website and my Youtube channel is that you jam with the game you have; if you want a chipper, you get a chipper.

A friend of mine, Didi, used a chipper for years before he learnt to chip with his 54° and he played off an 8 handicap with that chipper! He had to stop using it because he got so good with it that some people wouldn't play against him if he brought it! Check him out in the video below.

Below are some of the best golf chippers in the game right now.

A lot of players get nervous when chipping from the nature of a chip. A chip is a short shot that requires feel and touch.

Often the chips are played off the fringe or the fairway which can have tight grass, making the idea of clipping the ball off the turf a scary one. It sounds silly to a lot of golfers, but we've all been there.

The chipper comes along and makes that shot easier by allowing you to have more of a sweeping putting stroke without worrying about teething the ball across the green or duffing it one foot in front of where you're standing.

Should you get one or learn to use a wedge?

There is no hard and fast rule for the way you approach the game. My philosophy throughout everything I think about golf is to make it as enjoyable and stress-free as possible.

If a chipper will remove stress from your game and allow you to cut three or four shots off your score, make the beer taste better and give you a butterfly in your tummy to play again...I think you know where I'm headed. Whatever gets you jazzed to play golf again is good for you.

Follow your gut. Do what it says. A man with a chipper knows what he wants, he wants to get that ball in that hole in the leat strokes possible.

The only thing you must overcome is ego.

You'll get a ribbing and some comments from other players because using a chipper is seen as equivalent of joining a suicide cult.

Just keep that in mind.

But then learn to use it and hole more chips than them. Silence them with results.

Don't get a two-sided chipper

Two sided chippers aren't going to benefit you. You'll almost never use it left handed if you're a righty, I swear to you.

Getting a one-direction chipper is going to benefit you more as they have excellent alignment aids on the back of them. The two-way chipper doesn't and what's the point of getting a new club for chipping if it doesn't FULLY help you chip.?

Best for long bump and runs and greenside chipping 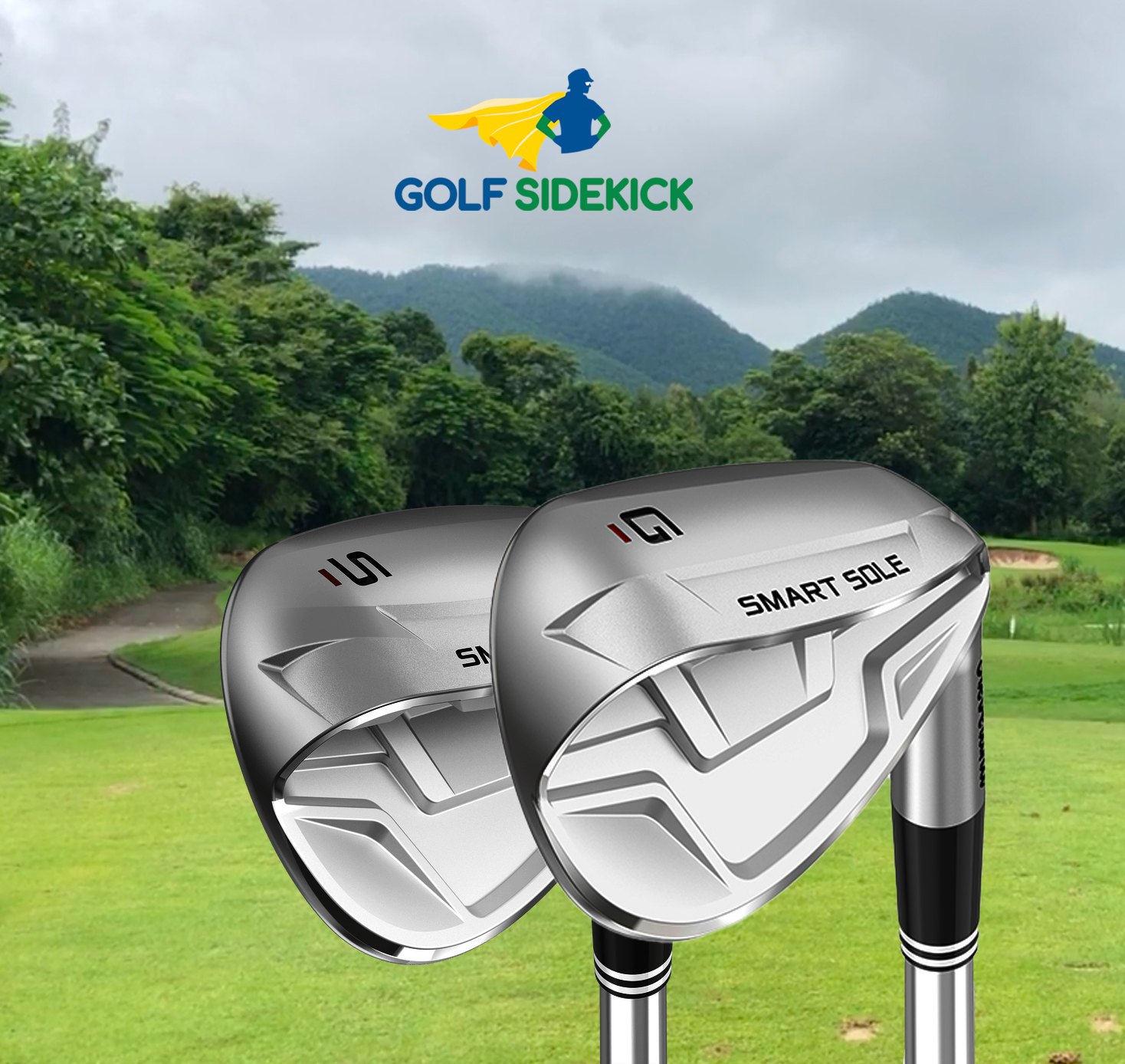 Cleveland have rally cornered the market with this club. The C wedge is called that because the C stands for Chipper.

But the reason it works so well is because you can also use it from a distance. I used it in my video on breaking 90 by hitting under 150 yards here (part 1, par 2, part 3) and I can confirm it's a handy club when the fairways are firm and running smooth.

You can run it up to the green from up to 70 or 80 yards out. Green side, it takes some getting used to because the face is quite hot, meaning the ball comes off the face quite fast but with an hour or so of practice, you'll get used to it.

Wide sole and upright stance for simple back and forth chipping 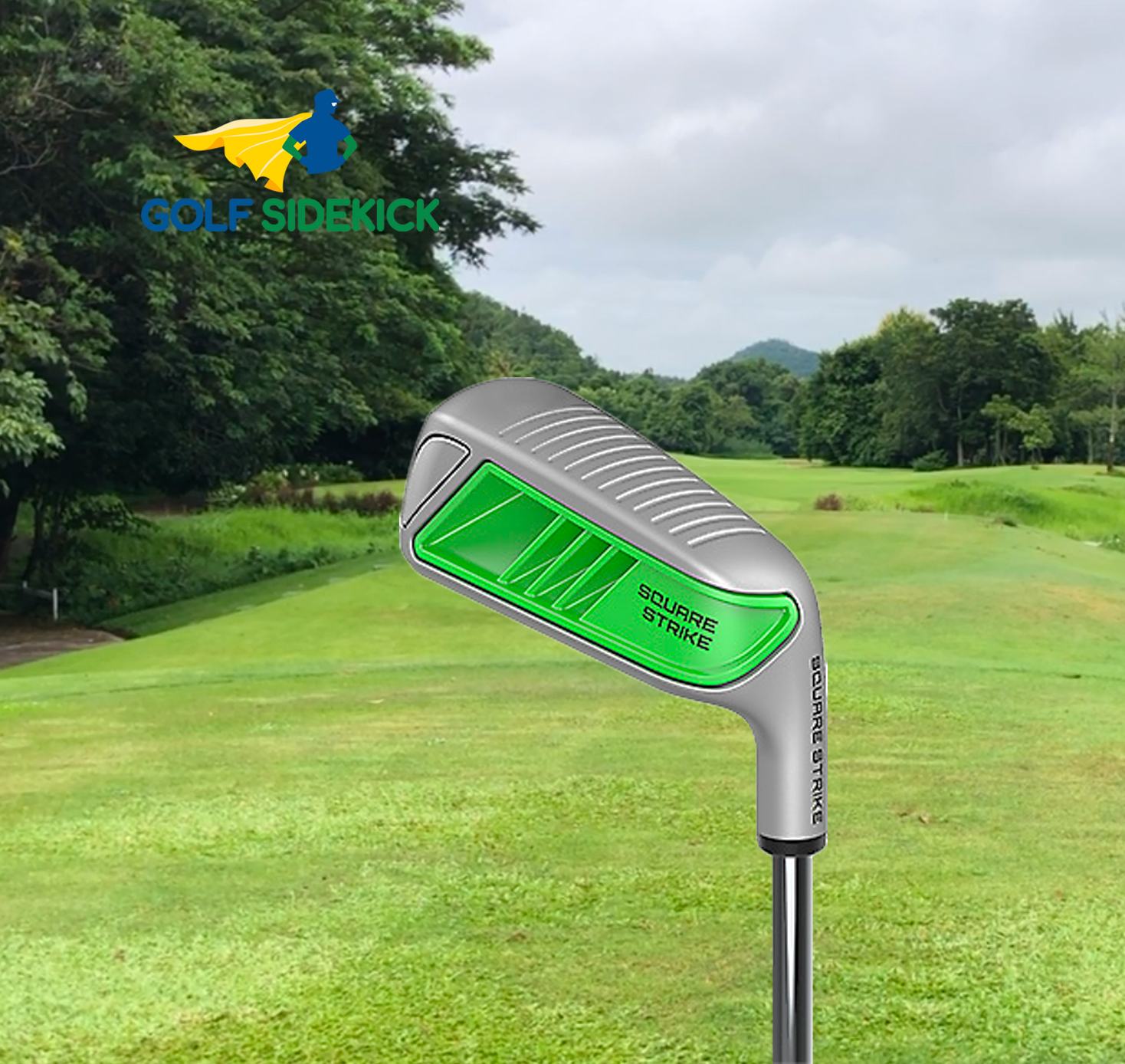 The Square Strike wedges always seem a bit gimmicky of course and they are not miracle clubs...I've heard all those clichés. But I've personally seen people get these and just use a putting grip to chip with and learned the way of the bump and run.

They then moved onto chipping with their normal wedges afterward but without the Square Strike, they'd still be chunking and hitting the ground before the ball on chips over and over.

There is a 45 degree option and that's a nice 9 iron loft. With a simple putting motion, standing closer to the ball, you'll find it very easy to chip and have a much larger margin for error because the sole is wide and thick. You'll glide through the turf and execute chips much easier.

Big mallet and heavier weight for the slower greens 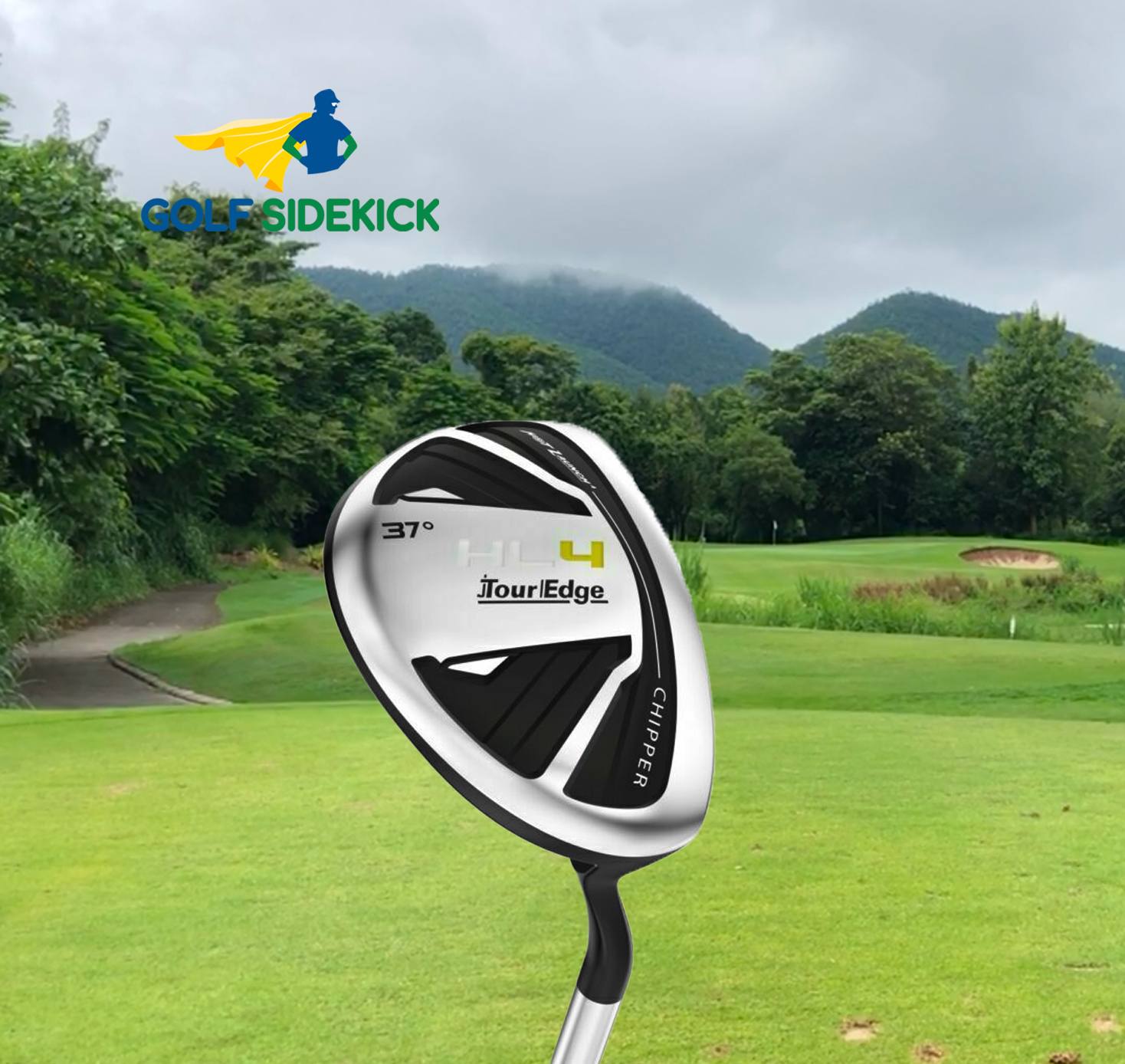 Mallets give you an easier alignment aid behind the face of the club and often, the extra weight can help to lower the center of gravity to get more force behind the ball.

That means it'll pop up much easier, without the need to "dig" into the ground toward the ball. The Tour Edge has 37 degrees of loft which is something like an 8 iron.

The difference I find with these clubs is that when a player looks down at the bigger mallet and the smaller face of the chipper, it's just more confidence inducing. Looking at the sharp edge of a wedge renders some players paralysed over a golf ball.

And 8 iron can work but once again, a lot of players struggling with chipping want to help "lift" the ball off the ground. This mallet will require a very minimal effort to bump the ball airborn and have it flying with enough velocity to roll up to the pin comfortably from those touch greenside lies.

Alignment aid makes it easy to get started on line

When you look down at this club, it looks like a putter but has the loft of a strong 7 iron at 35 degrees. It can have lower loft because of the rear-weighting where the force of the club comes from the back and gets under the ball, launching it higher.

It's got the loft of a 7 iron but it's the length of a putter so don't worry about that. It will be upright so you'll be standing in a putting stance and just need to swing back and through like with a putter.

A gooseneck shaft that does not touch the club face means you can forget about shanks, because there is no hosel to shank it off! 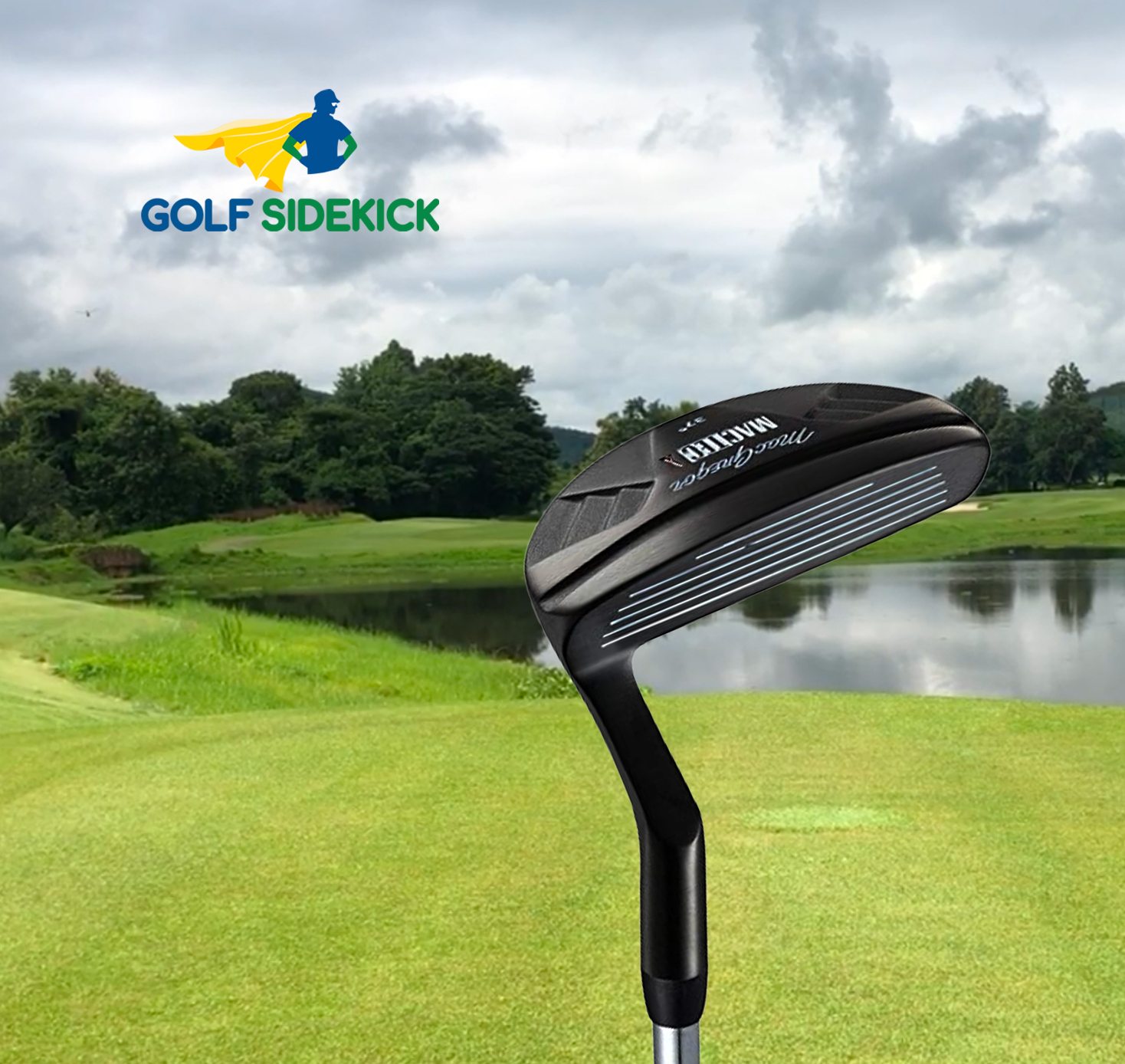 Very similar to the other clubs on the list but with 37 degrees of loft similar to the Tour Edge. The perimeter weighting on the semi mallet chipper from Macgregor means it can work a lot like a cavity backed iron for even more forgiveness on an already forgiving club.

The wide sole means it will continue moving through the turf instead of getting stuck if you do catch the earth before the ball a little too soon.

With so many options out there to chip and putt and get the ball in the hole, whatever gets the job done for you is most important.

The game is there to be enjoyed and I love to see chippers out on the green side shots. It means this dude knows what he wants and he wants to get that little ball in that little hole.

The Cleveland Smart Sole C Wedge is a very very versatile club and will serve you well from inside 80 or 70 yards all the way to green side. The best golf chipper in the game right now.