How the Handicap System Works – Don’t be ignorant! - Golf Sidekick

How the Handicap System Works – Don’t be ignorant!

Running my Youtube channel has shown me it's crystal clear that there are large populations of people who have no idea how the handicap system works.

That's fine but talking about handicaps or other peoples handicaps makes you look like a dummy if you don't know how it works in the first place.

A handicap is just something that we use to play stroke play or match play games against people of differing handicap levels. It is not some reflection of self worth. People get so caught up in the handicap as if being higher than someone else means you're less of a person.

Here's a video of me - a 4 handicapper - and a pro friend of mine. Whether you believe I am a 4 handicapper is up to you. This course was from the back tees, which in general on most courses will increase the course rating by a stroke or two. The slope rating I am unsure of but the slope rating can range from usually around 118 up to crazy difficult courses like Bethpage Black and Pinehurst No 2 over 150. That's tough.

The last 20 rounds you play go toward your handicap. They count your best 8 out of those 20. That is why they say, the handicap system is a measure of your POTENTIAL.

This does not merely mean they count your strokes and minus par and that's your handicap.

The DIFFERENTIAL is the difference between your score and the stroke rating and slope rating for that day on the golf course.

These ratings can change depending on the tee, distance, flag positions, weather conditions, turf conditions...everything. Here's an example of someone shooting a score of 80 six times in a row. Now with only 6 scores, the system counts the 2 best.

But more importantly, note how he shot 80 with different COURSE RATINGS and SLOPE RATINGS. These are measures of difficulty and so the differential ranges from 2.6 to 8.1. He didn't even shoot 2.5 over par once, but that's his handicap index.

Be careful judging handicaps of others or you'll look a fool

Do not assume someone's handicap based on a shot here or there. Don't judge a person's handicap after one round. If you do, you put yourself in the same position to be judged by the very same people.

The thing with a handicap is that because there are 20 scores, and only 8 counting at any one time, the other 12 mean nothing, until you start replacing your scores with higher scores. So it's easier to go DOWN in handicap than it is to go UP.

A scratch handicapper can shoot a 90 or a few scores in the high 80's and it's not going to make a difference to his handicap, because his handicap will be calculated from the 8 best differentials.

Here's a bigger example of a 4 handicap golfer. 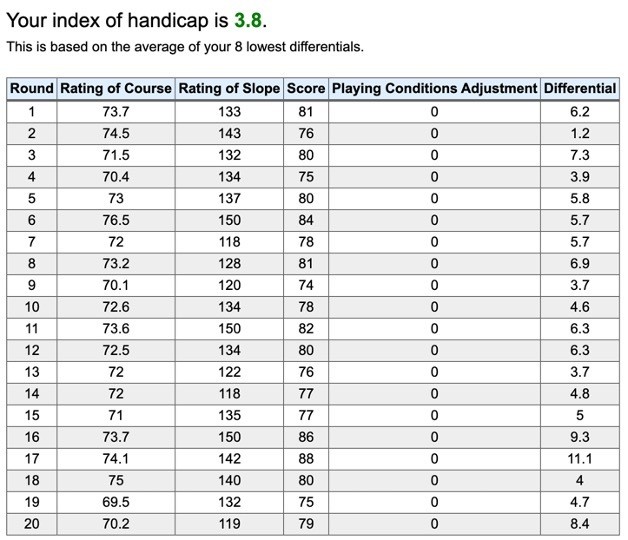 The non-ignorant and educated among us would know that only the best 8 differentials here would be counted, and look at that...

Best 8 differentials out of the last 20.

The PGA Tour on television is not amateur handicap golf

The way pro's hit the ball on television is the top 0.01% of golfers in the world. This is not amateur handicap golf filled with people who work office jobs, trucking jobs, manual labor jobs, and play once or twice a week. Resist the delusion of the PGA Tour that that may be normal in any realm.

If you think someone's handicap is too low, be quiet...

Why would you call someone out for having a handicap lower than what you think they should have?

The only time you should really make a fuss is when someone claims a handicap much higher than it should be, otherwise known as a sand bagger. These guys use a higher handicap to win in competitions and it's not fair. They should be banned from competitions.

Now that you know how the handicap system works, you can understand that it's merely a measure of someone's potential. It is not an attack on your person or your character to have someone announce their handicap is lower than yours.