Driving irons have historically not been easy clubs to hit but manufacturers are discovering ways all the time to increase forgiveness and make the driving iron accessible to everyone.

Before pursuing one of the best driving irons for high handicappers, perhaps take a quick look at the guide for hybrids. They are supposed to be easier to hit, but if, like me, you'd prefer a driving iron, I've listed the best, most forgiving utility irons below. 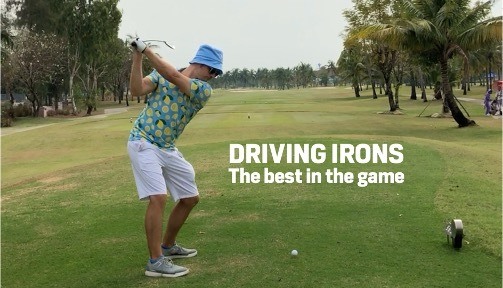 The case for the driving iron

I don't like hybrids personally, as they like to go left and and lefter. I've tried countless hybrids and just always come back to my Srixon ZU85 2 iron.

Some people find the extra junk in the trunk distracting plus the increased offset at address makes the club look closed.

I've found a lot of utility (driving) irons are standard fit with steel shafts and that's a big plus so it can match the behavior of your set of irons. Of course, the driving iron can also have a graphite shaft standard fit, but hybrids all come with graphite shafts.

Should I get a driving iron?

Have you ever hit one?

I mean that without malice. I've seen high handicappers like Brian (BDog) on my Youtube channel try a driving iron and all he felt was pain and ringing in his hands. He LOVES a hybrid though.

Other times I've seen my high handicapper partners hitting driving irons and telling me that feel that they can't get a hybrid in the air and the driving iron gives them way more roll out.

It comes down to swing speed and amount of tension in your body. If you have good swing speed, you can go lower lofted. If your swing speed is not fast enough, the driving iron may hurt you more than a hybrid would. Tension in the arms, shoulders or hands will also kill the speed and relaxation needed to hit a driving iron. If you have these two things sorted, you're going to be okay.

It's all personal choice and if you have the speed; or just prefer the look of an iron behind the ball, you have to go with your gut. The aesthetics are 75% of the battle. If you don't like the LOOK of the club, you're not going to hit it well.

How do I select the correct loft for my driving iron?

Honestly, at high handicap and slower swing speeds, you should be looking at higher lofts - 20 degrees and higher. As your speed increases, you can look below 20 degrees.

The current driving irons are higher lofted than the ancient ones which could go down to 15 degrees. Modern ones seem to start around 18 degrees and they're tough to get airborne. They're A LOT easier than the antiquities you can find at junk shops, but still, we want to have a club that is not hard to hit. It needs to be a joy-bringer.

Keep in mind also, that a graphite shaft will be lighter than a steel shaft and can assist in increasing some club head speed.

Below are some of the top driving irons to help you with accuracy off the tee and get you in play to start lowering that score to the low 90s, upper 80s. These are the easiest to hit and will provide maximum benefit to high handicappers looking for a reliable tee ball.

The Cobra King Utility comes in either a graphite or steel shaft and with the graphite, you'll be able to get a lighter experience but if you're a fast swinger, the steel can match your irons.

You want to pay more attention to the 19.5 and 22.5 degree lofts. These driving irons are adjustable and can be set to a "draw" setting to promote more of a right to left ball flight. The 22.5 degree club for example can be adjusted to 21 all the way up to 24 degrees for more forgiveness.

The ball speed is very consistent off the club face between thins and mis hits and center strikes. Cobra are becoming well-know for the forgiveness of their irons for the weekend player and the Utility iron is similar in that regard.

From the top, the iron has a thick top line and the overall look is very similar to a normal iron in your set. From a distance the club LOOKS like a blade but it is not. it's a hollow-backed design and that resembles more of a hybrid action without the extra baggage in the back of the club.

Despite being hollow, it sounds crispy and tasty off the club face and when you pure one, everyone in the vicinity knows it.

The UHX from Cleveland features a hollow-body construction, same as the Cobra above, delivering more distance with additional forgiveness when comparing to normal irons.

Cleveland's Launcher UHX comes with a graphite shaft and with lofts of 20 degrees for the 4 iron and 23 degrees for the 5 iron, the club is going to help you get it airborne and flying long.

The steel face insert in the variable thickness face delivers stronger ball speeds for distance, reducing the impact of mis-hits off the toe and heel.

Interacting with the turf is much smoother with the v-shaped sole. This is a feature on the Srixon irons. Srixon is part of the same company as Cleveland and XXIO. Quality and value for money combined with forgiveness make Cleveland an EASY recommendation for your game.

The most hybrid looking driving iron

They might almost appear to be hybrids, but when you cozy the club to the ball, it looks so different. The Taylormade GAPR MID is a chunky driving iron.

The GAPR MID is more prone to a right to left ball flight. Looks-wise, it looks like an iron on the face and the slight offset helps to stop the left to right movement. The sound of the club lets it down with a heavy, thick sound. It can be quite a common complaint with the foam-filled clubs being produced lately.

The GAPR HI is much more of a hybrid club so was not included in this purely driving iron list. It will be easier to hit but at the same time, regardless of which model, the best lofts for this driving iron are 21 and 24 degrees.

Remember we want to have a club that is easy to launch and forgiving on mis hits. The GAPR is a solid club.

In the Taylormade SIM Max DHY, you have a very forgiving DHY (Driving HYbrid). The bottom of the club very thick and full of meat which helps with confidence - as opposed to the razor like thinness of a 1 or 2 iron of old.

The trajectory is higher than the other Taylormade offerings in the driving iron category because of the hollow-body construction with a low and deep center of gravity.

It's important to steer clear of the UDI model as this is for better players with more speed. Everything about the UDI model is thinner, smaller and harder to hit. The DHY SIM MAX model has been designed to be the easiest to hit by putting the weight in the sole, not behind the face.

Because of the thick sole, the DHY can be used from the rough as easily as any hybrid. It's a big plus because driving irons can often be seen as only a tee club. I can see this club being used to punch out down the fairway under trees, but from the fairway, I would be worried about chunking the ball because of the massive sole. Tee and rough is where the DHY will shine.

The DHY features a lot more offset than the UDI model which will promote less slice. Using the higher lofted options of 19, 22 or 25 degrees will ensure more forgiveness too and keep the ball flying less offline.

A forgiving single iron can work just as well

This is not necessarily a driving iron in the true sense of the word but the Callaway B21 Big Berthas have very strong lofts.

The key in this equation is that these irons are extremely forgiving to hit and that 18 degree or 21 degree loft are designed with special technology to help you get the ball in the air. This is a no brainer if you're looking for a single iron to hit off the tee.

You can order the clubs individually by selecting the number iron. I suggest 4 or 5 iron as the 18 degree loft on the 4 iron will be infinitely easier to get airborne than a driving iron with 18 degrees of loft.

The Big Bertha B21's are deep cavity backs with perimeter weighting to give you the most forgiveness on off-center hits. A really simple, efficient solution.

Other similar options would be Taylormade M2 single irons or Cobra single irons in the 3, 4 or 5 iron model. This is a little secret no one will tell you. Skip the driving iron utility irons and just get a lower lofted forgiving High handicapper iron!

That's right, sometimes single irons from a set work too!

There are driving irons that can help you but the secret sauce is in the fact you can just buy a single iron from a forgiving set of any Taylormade, Cobra or Callaway set and it will work maybe EVEN BETTER than a utility iron.

It's a cheap, reliable option and the clubs made in the last 3-4 years are so easy to hit in lower lofts from a tee peg.

Taylormade, Cleveland and Cobra are top of forgiveness game in the utility and driving iron world. Make sure you have enough swing speed to get the lower lofted clubs airborne and then proceed with the higher lofted versions to ensure forgiveness.

There's no rule against having multiple driving irons if you prefer them!