Case Study: Shooting 77 with Swing Changes and How to Get Better - Golf Sidekick

Case Study: Shooting 77 with Swing Changes and How to Get Better

In this video, I shoot a 77. yet again breaking 80 but feeling like I left so many shots on the course.

Granted, the main focus was playing with Tsepho, a subscriber and now good friend, and I wasn't that focused on my game. It goes to show you just how important focus, clear thinking and not rushing are, to good scores.

How to Break 80 and How to Get Even Better!

Swing THROUGH the ball not AT it.

If you're changing your swing, as I am, it's vital to work a lot on the driving range to really groove the new feeling in before hitting the course.

I struggled in the beginning of the round because as you know, under pressure, we revert back to our old habits and I started hitting AT the ball instead of THROUGH it.

We become so BALL-FOCUSED that we get tense and hit AT the ball as if that's where the swing ends. We need to remember to get to the finish of the swing, nice and balanced on the left side. Let the ball just get in the way of your easy smooth swing.

I have a very funny habit of letting the ball creep back in my stance slowly over 6 months periods.

As the ball creeps back, so the angle of attack of your club to the ball will become STEEPER and STEEPER. This is not ideal at all especially because lower lofted clubs become more difficult to hit as you try to "lift it" into the air instead of compressing the ball and allowing the club to do the work.

With this poor ball positioning and the ball-focused, steep swing, a couple things happen:

And of course, if you're crapping yourself about where the ball will go, you'll be tense when gripping the club. Tension in your hands runs through your arms, into your shoulders and neck. Hitting a ball at high speed, while tensed, is a sure way to injure your upper back and neck as well as your traps.

How I fixed it 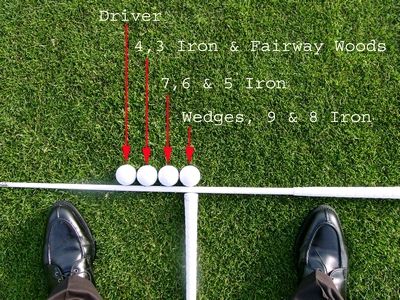 I put two shafts on the ground, one for alignment down the target line and one more lying on top of that one in a + shape. I place the ball in between the middle of my stance and the left heel depending on the club length. The longer the club, the further forward I place the ball.

I was hitting my wedges off my back foot and my driver was near the middle of my stance! No wonder, I couldn't hit anything!

Doing this drill with the + shaped shafts once a week will keep my brain in order and let my body remember where the alignment and ball position is supposed to be. If I don't do this, eventually, I will get into bad habits again.

Are you a smart guy? I think I am, but sometimes I do stupid stuff on the golf course even when I know the best solution or the best shot. It's usually EGO which brings on the HIGH STRESS GOLF.

The first question I used to ask myself was "where is the good miss?" as in, where, if I miss this shot, will I be safest to get up and down or have an easier next shot.

While that is a valid, good thought, I suggest thinking this massive question which will drop all your ego and help you enjoy golf again:

WHAT IS THE SIMPLEST SHOT I CAN HIT HERE?

That's all it takes. I discovered this during the round in the video. Instead of hitting a stressful shot because of your ego, you just pick the shot you KNOW you can hit and gives you a simple next shot.

For example in the round in the video:

Do you see how that works?

HOLE 3: This is a big one! Around 180 yards to the pin and while I can get my 7 iron there and that would be the pin-high distance, what am I doing to myself?

The water is 9 yards or so in front of the pin. I'm hitting over a hazard to a pin 9 yards over the water with a club that will finish pin high! No! I should be hitting a 6 iron with a smooth swing because the back of the green is around 200 yards away. That's 20 yards of green behind the pin! That's stress-free.

Instead, I went EGO-GOLFING and smacked AT the ball under pressure, and hit it Out of Bounds and took a double bogey. Not good.

When hitting over hazards, we must hit a club that will clear the hazard and usually finish at the back edge. Forget the pin, safety first!

HOLE 5: After a smashing booming big drive up the hill (my best in recent memory), I proceeded to rush my second shot.

Now if you watch my BREAKING PAR VIDEO, you'll see I mention the THINK BOX and PLAY BOX. On my second shot, I did not properly plan my shot and get fully committed in the THINK BOX. I took that doubt into the PLAY BOX and screwed it up.

I should've committed to a smooth 54° wedge to the center of the green with a little draw and walk off with a par. Inside 120 yards, I can't afford to make doubles.

HOLE 8: Some holes we screw up, no problem, a bogey every now and then happens but what is important, is to get GREAT inside 100 yards.

I've been really working on my confidence and what made me really confident without changing a single thing was getting new wedges. Now, I am an arrow-blamer, not an Indian-blamer. I'm also a great proponent of the saying "a bad workman blames his tools, but a master craftsman knows when to get new ones." which I made up myself but whatever.

I got Cleveland wedges with a new gapping of 50°, 54° and 58°. New clubs always make me feel better because I'm not looking down at the ones I lost confidence in 5 years ago! You should do the same, and don't feel ashamed in the search for the right club.

A great club for you is just one you pick up, look at and feel great holding. There is literally nothing else to it. I've never hit a club badly which I liked to have in my hands and look down at. I have hit the latest technology that promises to change your game and when I looked down at it, I just knew I'd hit it badly.

That's the power of your mind and let me tell you, it's powerful which is why I focus so much on thinking, focus, commitment, will power.

HOLE 11: I didn't need to hit driver here but I really wanted to get it right as it's a new one. But this is a HIGH STRESS shot. I bring that water on the right into play. On the tee, I can't see much besides the bunker right. It's a stressful EGO GOLF shot.

What I should've done is hit a 3 iron because the landing area is so narrow at the hybrid and driver zone. A 3 iron up the left and perhaps another 3 or maybe a 5 iron into the green would've been perfectly playable on this stroke index 2 hole.

HOLE 12: I was unlucky to get the lie I did in front of the bunker. I was standing with all my weight on the left foot and the ball was IN FRONT of my left foot in ball position. I thought, well it will probably be a fat shot so I clubbed up to a 9 iron.

I flushed it so well that it flew over the green 25 yards. The important thing is to realize you're probably not going to par the hole, take your medicine and just chip it ONTO THE GREEN. Priority one! Hit the green!

Now, the MOST IMPORTANT THING here is the severe danger of going OVER the green. Anything off to the left and directly over the pin falls onto hard, steep ground and you're finished - hole over, you may as well pick up and take a double!

Like hole three, the par 3, where we hit over water and focus on easily CLEARING the hazard, here we need to do it the other way round. We need to see how far it is to the front edge and hit it 10 yards past that to the middle front of the green. We must hit a club that can NEVER reach the back of the green with a perfect strike.

I should have measured to the front edge, 150 yards, and hit a wedge downhill downwind to land on the front-middle of the green. The wedge is extremely hard to pull but by hitting the 9 iron, focusing on the flag and putting unneeded stress on myself, I hit a tug with the 9 into NO-MANS-LAND. Double bogey thanks.

HOLE 18: I got away with this but you know what my thought was just before I hit the shot?

And what did I do? My brain heard "FADE THIS INTO THE WATER" and that's what I did.

We should think in positive thoughts: "Start this on the pin and draw it to the center left of the green." "Hit a 5 iron just short of the green, with no stress and chip and putt for the birdie"

How can you shave those last few shots off?

Despite the poor shots and some poor thinking, I was able to scramble my way to a 77 on a pretty tough layout. But how?

This is the only area in the game where we can all be literally as good as a pro.

You may never be able to hit it like Brooks Koepka or be pin point accurate with a long iron like Jack Nicklaus. But you can chip and putt like a god.

I will produce more chipping and putting content to take you to the level of the pros so you can shave off 5-10 shots without even hitting the driving range!

For now, why not check out the following articles and videos for help with this:

Golf Sidekick - How to Putt Video

Golf Sidekick - How to Chip Video​

Give My Golf Sidekick 6-6-6 Philosophy a try

I have a philosophy of allowing yourself to be crap sometimes and allowing yourself mental vacations. You need to be sharp with the short game and think deeper than you ever have but I promise, loads of guys have seen success by just allowing themselves to be imperfect. Check it out below:

Add Your Reply
We use cookies to ensure that we give you the best experience on our website. If you continue to use this site we will assume that you are happy with it.Ok