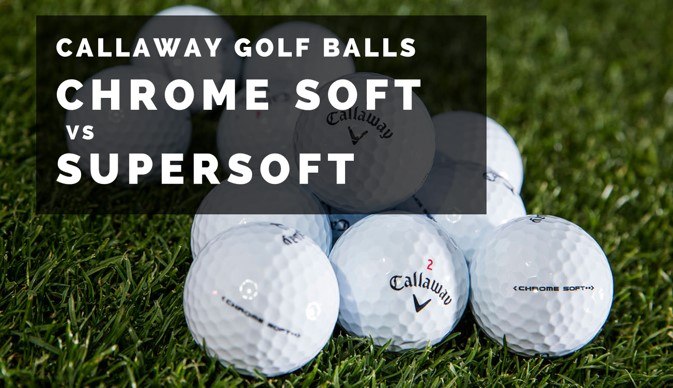 The two most popular balls from Callaway seem to be locked in a head to head struggle for dominance.

But the distinction between the two is clear. One is a premium ball aimed at golfers who require more spin around the greens, while the other is a distance ball which means they're aimed at golfers looking for longer, straighter shots while sacrificing spin.

As you can see, the Supersoft and Chrome Soft golf balls are like comparing apples and oranges. The Callaway Chrome Soft is made of four layers. By default this means it's a ball aimed at the better player looking to shape the golf ball left and right as well as for golfers who want to get more grip and rip on the greens.

Coupled with the multiple layers, the ball is encased in a urethane cover to spin a lot more on every shot than a low compression two piece surlyn covered ball. You can expect some golf balls spinning backwards with these especially with a wedge in your hand. The Callaway Supersoft is a two-piece golf ball consisting of the inner core and the outer cover which is surlyn or as Callaway named it, Trionomer.

Surlyn covers are much firmer and less 'spinny' than urethane and are supposed to be more durable. However, the Supersoft cover is not as durable as the Chrome Soft which is a surprise. It does cost half the price though, so that makes sense.

The two-piece design of the Supersoft provides a core with low compression of 38 which in combination with the low spinning cover, reduces the spin of your shots for longer bombs. You'll have a higher ball flight which compensates for the lower spin rate, to help stop the ball on the greens.

A surlyn and two-piece construction means you'll like this ball if you just want more distance especially if you swing your driver under 90 mph. The name of the game with this ball is LOW SPIN. It will feel super duper soft, but it will not spin as much as a premium golf ball. High visibility options are available for both models

Callaway's Chrome Soft feels exactly like a Tour ball because it's actually played on Tour. Around the greens, it provides  gentler feel than the Supersoft. Off the putter face, the Chrome soft feels bouncy and reactive so overall, the Chrome Soft ball is competing with the Titleist Pro V1.

You'll notice the big difference between the balls in terms of spin when you're inside 130 yards. The Chrome Soft checks up and spins a lot more than the Supersoft on the shorter approaches. If you're a generally high spin player, you'll stop a Supersoft within a a couple feet of it's pitch mark but rip it back with the Chrome Soft.

The Supersoft runs out a lot more and won't check up on the green like the Chrome Soft. It's best for bump and run chips on the greens which is strange but it just goes to show, SOFTNESS does not equal SPIN. Off the putter it feels a bit marshmallowy like a piece of soap. Off the tee and with your irons, if you're an average to slower swinger, you very well might notice a slight distance increase.

Supersofts come in more colors than the Chrome Soft, but the Chrome Soft does have the Truvis soccer ball pattern option. If your eye-sight is not so great and you're a slower swinger, the Supersofts are a fantastic choice.

Get the Chrome Soft if you want a Tour quality ball that spins on the greens. If you're after more distance and less shape, particularly with a speed around 85 or 90 mph, the Supersoft is a great choice.

I am 72 yrs old and this ball really delivers. My driver swing speed is between 95 and 101 but this ball also delivers with every iron in the bag. Putting is great. The only drawback has been around the greens. This ball is a little lifeless, less perky, so you have to be more proactive and aggressive with your chipping.. The Pros far out way the Con so far. I played the Chrome Soft and it is a little softer than the Pro V1 but the distances were about the same. I played back in the day when Balata balls were the norm. This ball remind me of those balls…. soft off the face but great distance. Thanks